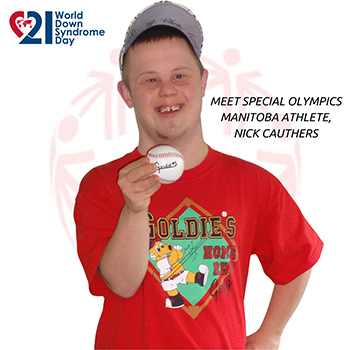 NICK’S STORY
Nick is a Special Olympics Manitoba athlete who has participated in various sports within the organization for roughly 20 years. Throughout the years, he has participated in curling, basketball, bowling and golf. Prior to COVID-19, Nick was very busy while participating in basketball on Mondays, bowling on Saturdays, and curling on Sundays. Despite his very busy schedule, one thing that kept him committed was being able to spend time with his friends and coaches while participating in physical activity.

Prior to Special Olympics, Nick participated in various social activities such as summer camps, attending school all day, and city programs including a soccer team. At this time, Nick’s family felt it was most beneficial for him to be surrounded by other children and not only those who have intellectual disabilities.

After some time, Nick’s mom, Lorraine, mentioned that once Nick was about 10 years old, he was at an age where other children were advancing more than him. So, once they heard about Special Olympics through Manitoba Down Syndrome Society, they thought they would try it out. Since then, Nick has loved every bit of it and still continues to participate in the organization until this day.

Despite Nick’s previous involvements in school and extra-curricular activities prior to Special Olympics, Nick and Lorraine both agreed that Special Olympics was a great decision for him. Not only do these activities give Nick a reason to get out and get active, but they give him something to look forward to all year round. From his experience thus far, Nick has been able to build strong relationships with his peers including his teammates and coaches, while staying in good shape and trying new sports.

So far, one of Nick’s favourite moments with Special Olympics was participating in the Curling Bonspiel at his home curling club. As a bonus, he even got to meet Canadian curler Colin Hodgson at the event.

Currently while Nick is not participating in programs due to the pandemic, he has found several ways to keep himself busy. One thing he especially admires is tracking his daily steps on his Fitbit and taking his dog for a daily walk with his dad. He is also currently participating in university courses that have been keeping him busy three times a week.

During his free time, he has also enjoyed building Lego every day and going to Tim Hortons with his mom. Although he is not able to participate in his own sports programs at the moment, he is very happy that professional sports are back on TV.

Other responsibilities around the house such as emptying the dishwasher, folding his laundry, getting the mail, and checking his emails have kept him on his toes each day.

Lorraine believes other parents/caregivers should have their children join Special Olympics because it gives them an opportunity to learn and participate in various sports that are tailored to their abilities. She feels Special Olympics is a great place for athletes to make friends and build relationships with the leaders/coaches, just like her son has.