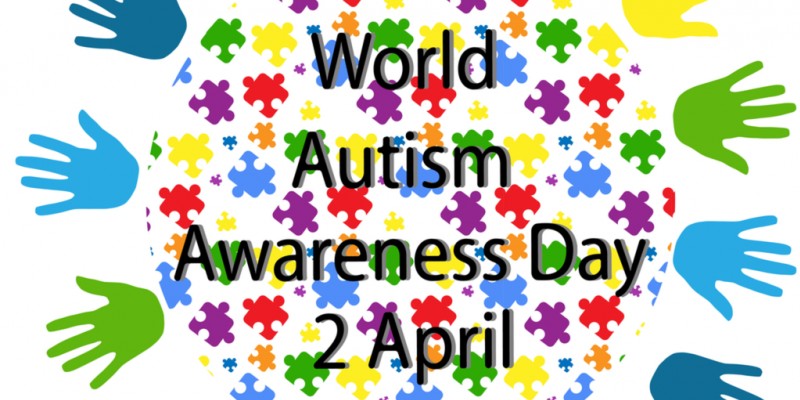 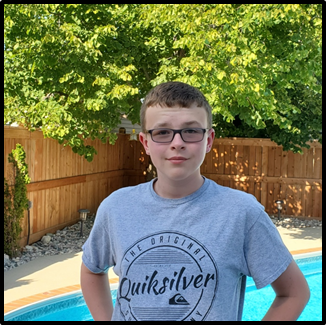 At 15 years old, and in grade 9, Ben Purvis has been a Special Olympics Manitoba (SOM) athlete for over 4 years. When asked about his favorite sport, Ben shared, “I tried other sports like basketball, but I knew swimming was my favorite”. Besides his mom Corrie, Ben explained that his favorite stroke is freestyle, specifically the 50 meters. He even went on to share that he was starting to get into Butterfly, before the pandemic.

Corrie got Ben involved with SOM after hearing about it from another mom, she shared that she got in contact with Katherine and the rest was history. Ben has achieved many successes so far in swimming, including being on Team Manitoba, he went to Regina for a competition, and even competed in Brandon for the Manitoba Games, where he won a bronze medal! These were some of his most memorable experiences with SOM, “I really like to travel and see places that I have never been to”, Ben shared. Luckily, Ben’s successes with SOM and swimming, have taken him to new cities and places to explore. When asked, Ben shared what life was like before SOM, he said “I was home most of the time playing video games, I’m not a fan of the cold”, he laughed. Corrie went on to explain that “he has grown so much as an athlete over these last few years, physically, and within the sport!”

Since in-person programming has shut down, Ben explained that he has been working out as much as he can, he tries to every day. He shared, “my goal is to get my lower body strength up so I can be stronger in the pool and have equal power in both upper body and lower body”. Ben is excited to get back to in-person programming, he went on to explain that “the coaches train you well, they push you hard, but not always, it’s really fun”. Ben shared that he misses getting to meet lots of people, then Corrie added “and your mom is one of your coaches”, she laughed. As a volunteer, Corrie has been able to meet other great parents, who are nothing but supportive of their kids, and Ben. Corrie explained, “SOM can be competitive, but it can also be a place if you want to just go have fun”.

SOM has allowed Ben to participate in sport at his pace, and “has given him opportunities to get out of his comfort zone”, she shared. When asked why other parents should get their children involved with SOM, Corrie explained that SOM gives Ben his place, “there is a gap in other programming” she added. This opportunity has been a gamechanger for Ben, Corrie explained that “he has come out of his shell, and this has become a huge part of our lives”. Once, in-person programming return, Ben is excited to get back in the pool and excel in what he loves to do. 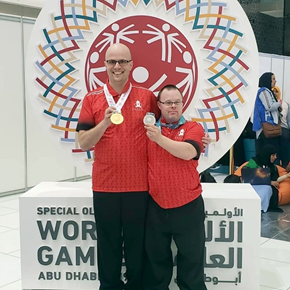 Philip Bialk is a Special Olympics Manitoba athlete who has been an active member of this organization for 31 years. He has not only participated in several sports such as swimming, bowling, athletics, soccer, and bocce, but he has also participated in athlete leadership programs and has been an athlete representative. At one point, Philip was participating in his sports programs, fulfilling the responsibilities of an athlete representative, participating in leadership courses, and working, all at once.

Philip explained that because of his busy schedule with Special Olympics while balancing his responsibilities outside of the organization, he has had his ups and downs, but has enjoyed every bit of it.

As a competitive athlete, Philip committed to putting in countless hours of dedication and effort into everything he did. His hard work was recognized when he was rewarded with the 2018/2019 Male Athlete of the Year.

On top of this incredible accomplishment, he was selected to compete in the 2019 Special Olympics World Summer Games in Abu Dhabi, United Arab Emirates. Not only did Philip represent Canada with his tremendous efforts, but he went on to win a gold medal in the singles bocce event, which just so happens to be his most memorable moment yet.

On top of his accomplishments as a competitive athlete, Philip has also proudly represented Manitoba as an athlete representative. Some of his responsibilities in this role included going to board meetings, going to official events, raising the flag at events, and more. One of the highlights of being an athlete representative was meeting the Governor General of Canada while attending the Special Olympics Canada Hill Day Reception.

As Philip patiently waits for things to start up again, he has kept himself busy while staying at home, going for walks, taking athlete leadership courses, and more. Maria, his mother, said sometimes he will even go for walks for hours at a time!

When asked why other parents/caregivers should have their children join Special Olympics, Maria had so much to say. Among the several benefits she listed, she emphasized the fact that this organization provides the athletes with a sense of belonging. She said that Special Olympics gives them something other places cannot, and that’s a place where they can be their true selves. She went on to explain that with everything this organization offers, the athletes are bound to find an activity they enjoy while being supported and accepted every step of the way.