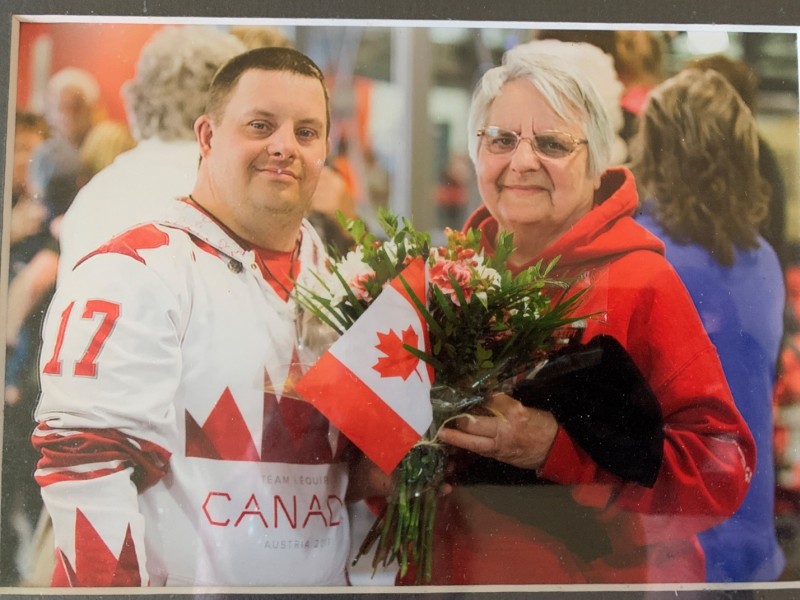 The exciting adventure of SOM (Special Olympics Manitoba) started about 35 years ago when Darren first participated in a competition.  I started out as a parent volunteer helping and encouraging the athletes and assisting parents and coaches.  The number of athletes in our club varied. For a number of years, Darren and Linda Koss were the only ones registered and I was the coach.  With Darren being the only one in competition I contacted June Mosiondz, a remarkable coach in Swan River. She was a great asset in getting Darren involved in the Parkland Team.  Gradually we recruited others in our Russell Clubs.  Once again we had an active club with athletes, parents and coaches.  I was the head coach who organized this and still hold that position now.  Being part of the Parkland Region provided more opportunities for athletes, coaches and parents to work together to build strong relationships.

When Darren was ten years old there were a number of intellectually challenged students at Major Pratt School.  Some staff were instrumental in organizing students to go to a Special Olympics competition in Brandon.  It was a huge success.  Parents volunteered to help and the Russell Road Runners Club was created. I was one of those volunteers and have played an active part in keeping this club going all those years and am still the head coach.

My experience with the Special Olympics has been and continues to be AWESOME.  The reflections of events, friendships, challenges and achievements provided me with opportunities to witness the amazing interactions of persons with intellectual disabilities and their supporters.  Special Olympics is dedicated to enriching the lives of these individuals not only through sport but also the many other programs that enhance personal growth and development.  We can all be inspired by the spirit and dedication of the athletes.  As I reflect on the adventure of being involved in SO, I realize the importance of embracing the impact that SO has in many different aspects.

There have been many memorable moments but undoubtedly the most amazing one would be involvement in the World Games in Austria in 2017.  The responsibility of preparing Darren for the games - the training, fitness testing, record keeping, following a schedule, eating healthy and keeping active were priorities.  Having the opportunity to attend a training camp in Toronto and then traveling to Austria was exciting.  I was ecstatic when Darren won 2 bronze medals but watching Team Canada win gold was exhilarating. As we cheered the 4 athletes to “GO,GO,GO” we wondered if our voices would ever be the same.  We waited anxiously for the results which confirmed that Canada did indeed win Gold.  The travel and the friendships formed will forever be memorable for Darren and me.

What has it been like having Darren as part of the Special Olympics?  If it hadn’t been for Darren, then perhaps I may never have been involved in SO. Watching him develop from a shy young boy who wouldn’t run in a particular race unless I ran with him to a responsible athlete who has won 64 medals, many ribbons, trophies and plaques.  He traveled to 4 National games in Prince Edward Island, British Columbia and Newfoundland and the World Games in Austria.  He has made many friends and has a remarkable memory.  He can tell you where and when he met them.  He has been an inspiration and excellent role model in encouraging and recruiting new members.

Many people comment on my commitment and dedication to Darren’s success and I must say I am very proud of Darren.  The community’s involvement in recognizing Darren has been overwhelming.  His name added to the Russell Olympic Gold Medalist sign, the plaque at Civic Centre and the Big Parade & Darren’s Day as part of the 150th Manitoba Celebrations have all been significant.

When asked why people should volunteer with SO I can give many reasons.  If anyone has an opportunity to be involved in this great organization they should definitely volunteer so they can appreciate the uniqueness the SO has to offer.  They can play a part in helping and encouraging Persons with Intellectual Disabilities to accept challenges as they are recognized by receiving awards, making new friends and have the opportunity to travel to witness their successes, acknowledgments, recognitions and acceptance is remarkable. The overwhelming support of family, friends and especially the staff at Special Olympics Manitoba in promoting this program enables many to follow their dreams.  We can all help promote the awareness and focus on the abilities instead of the disabilities of these special people.  Accept with No Exceptions.